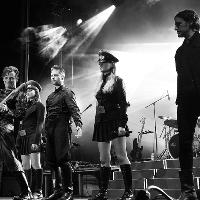 Lineup and Details for The Wall Live Extravaganza

“The Wall Theatrical Extravaganza is more than a concert – it’s the only production in the world presenting the iconic album in its entirety. Using elements of the “Pink Floyd The Wall Movie,” plus the legendary concerts staged in New York and London in 1981, and Roger Waters own production at The Berlin Wall in 1990, THE WALL THEATRICAL EXTRAVAGANZA has created a live theatrical rock spectacle unlike anything, anywhere previously seen. Backed by a killer live band, costumed elements re-create scenes from the 1982 Alan Parker directed, critically acclaimed motion picture, whose plot synopsis describes “A confined but troubled rock star descends into madness in the midst of his physical and social isolation from everyone.” Sets, props, costumes, effects, scrim and projection evoke a ‘Floydian spectacle’“.